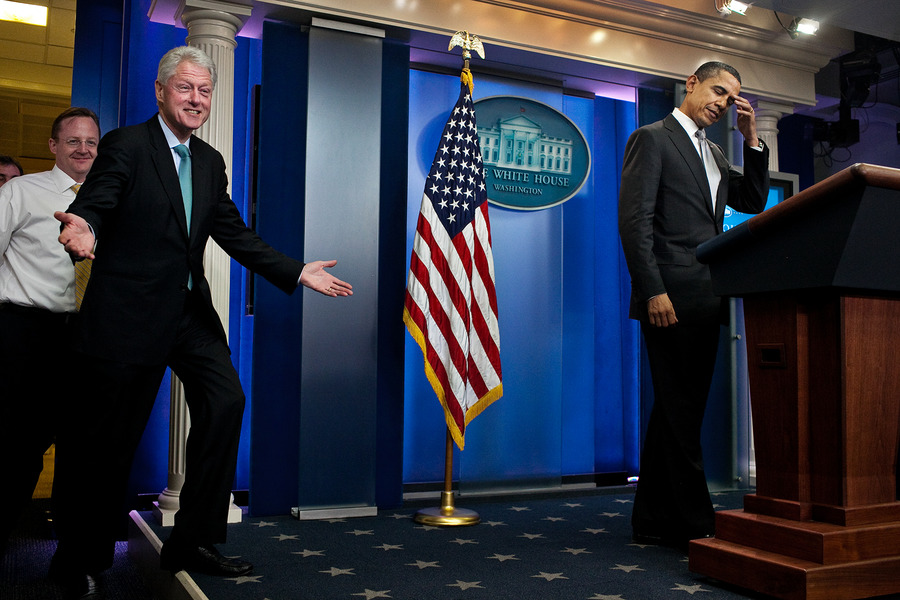 President Obama and former President Clinton speak to reporters in the briefing room of the White House, in Washington, Friday, Dec. 10, 2010. 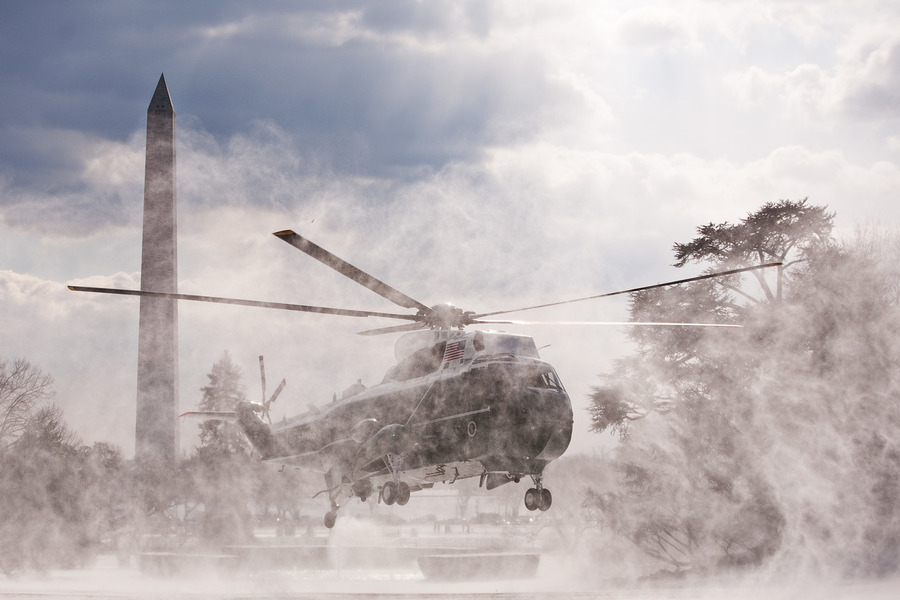 Marine One lands on the South Lawn of the White House, prior to President Barack Obama boarding to depart for Tucson, Arizona for a memorial service for Rep. Giffords and the other victims in the Arizona shooting, in Washington, Wednesday, Jan. 12, 2011. 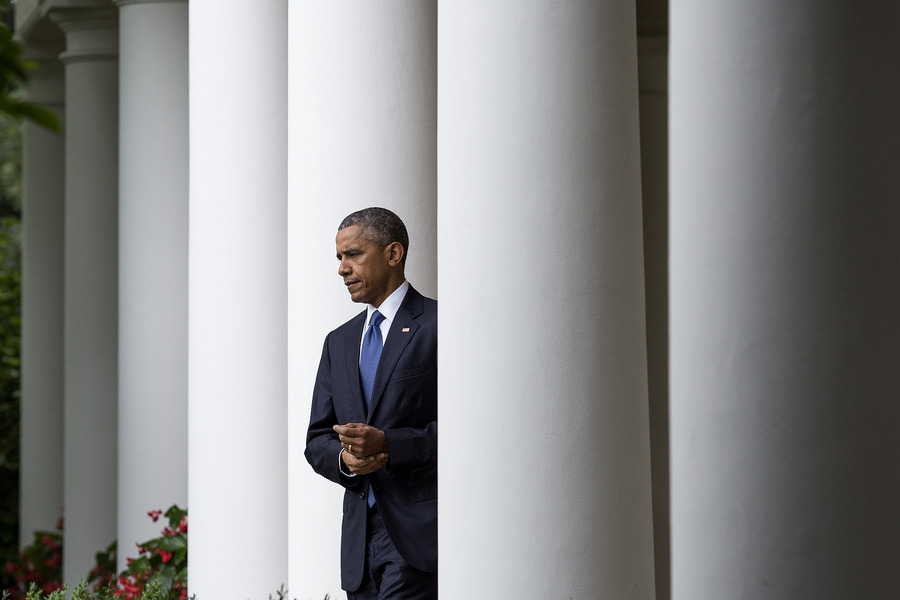 President Barack Obama arrives to deliver a statement after the U.S. Supreme Court ruled that same-sex couples have a constitutional right to marry nationwide, in the Rose Garden of the White House, on June 26, 2015 in Washington, D.C. 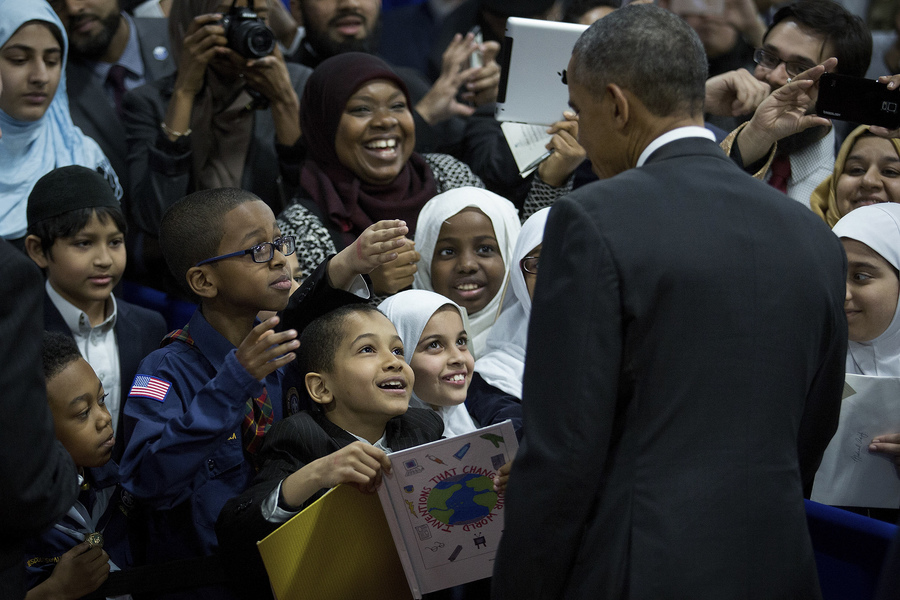 Following a speech denouncing anti-Muslim bias, President Barack Obama greets families and Muslim community members at the Islamic Society of Baltimore mosque, in Baltimore, Maryland, Wednesday, Feb. 3, 2016. Because of potential political risks due to anti-Muslim sentiments throughout parts of the nation, President Obama did not visit a mosque until the last year of his eight years in office. 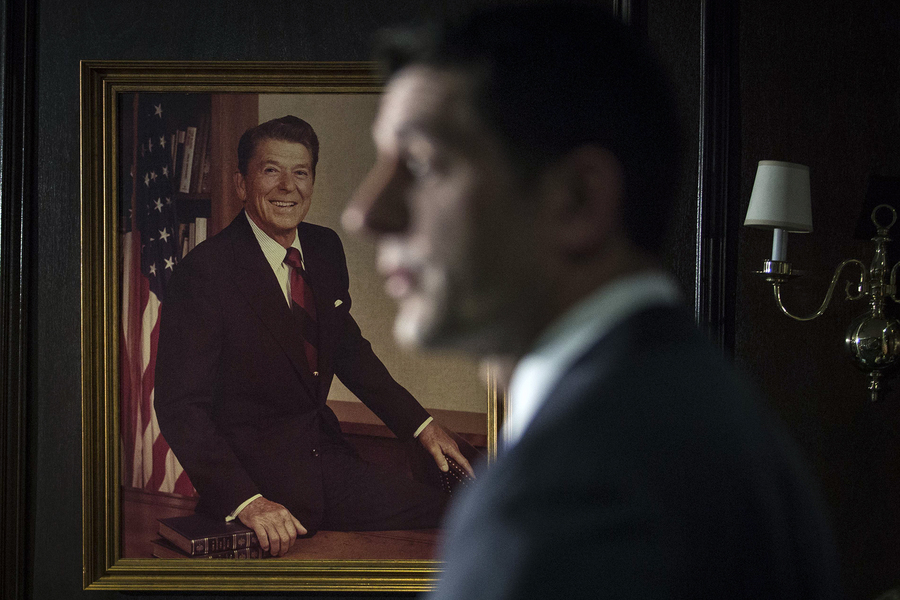 Speaker of the House Paul Ryan announces he will not seek the presidency, on Capitol Hill in Washington, Tuesday, April 12, 2016. (Drew Angerer for The New York Times) 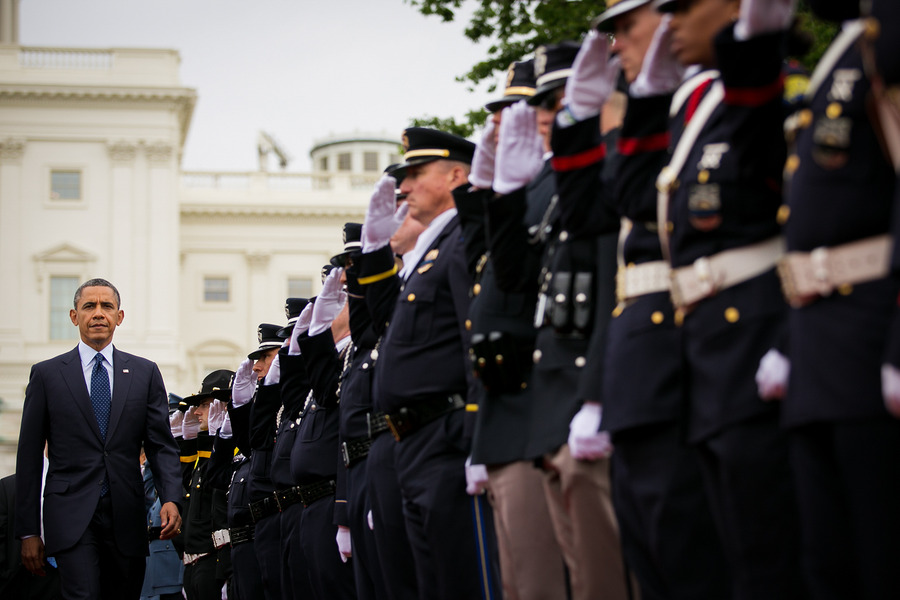 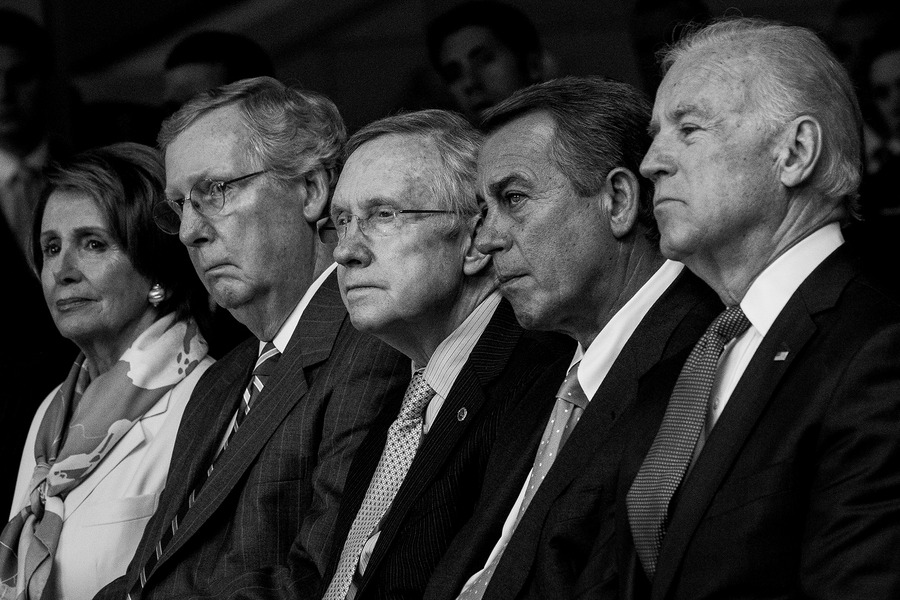 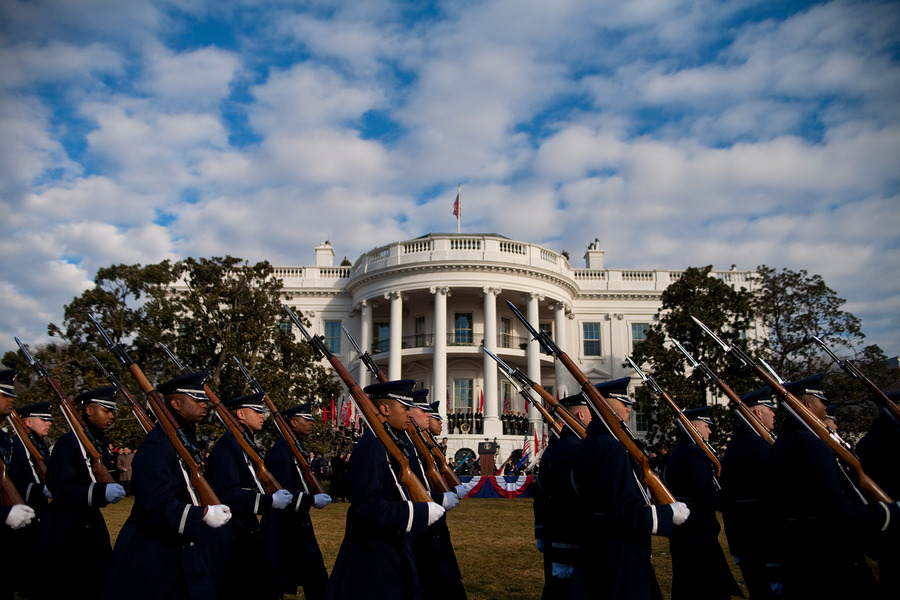 The honor guard gets into position during the arrival ceremony at the White House for China's President Hu, in Washington, Wednesday, Jan. 19, 2011. 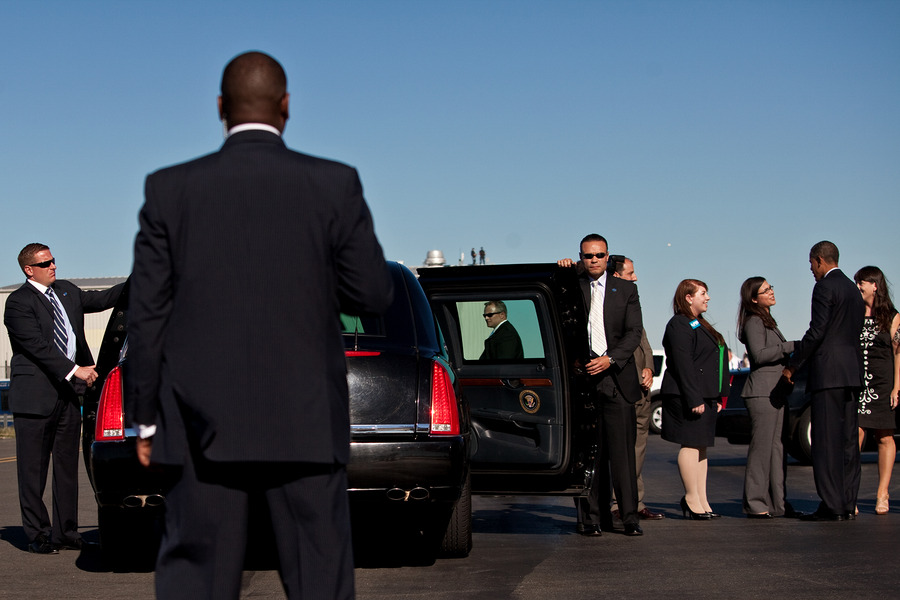 As Secret Service and his limo await him, President Barack Obama, right, greets people at the Philadelphia International Airport, on Sept. 20, 2010. Obama was in Philadelphia to campaign for Democratic Senate candidate Joe Sestak. 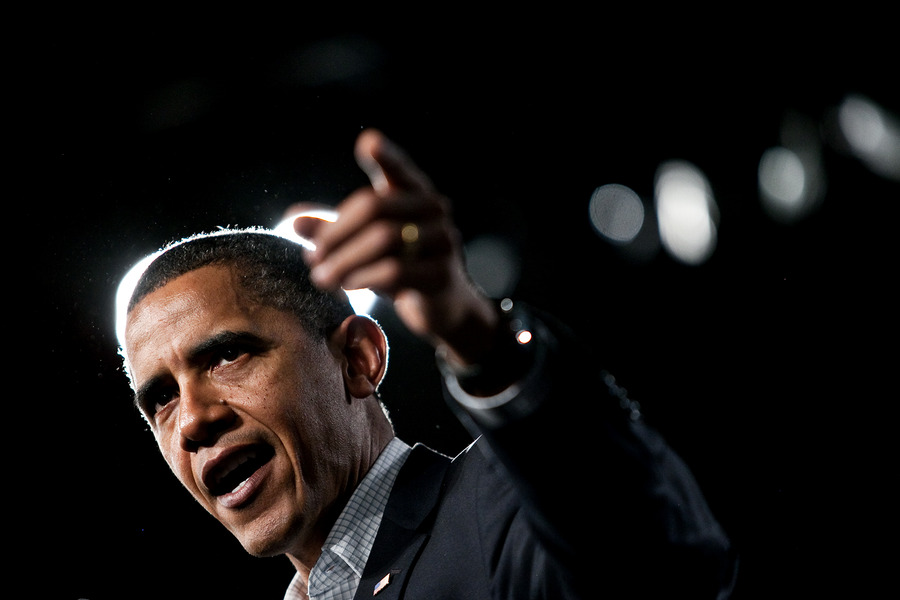 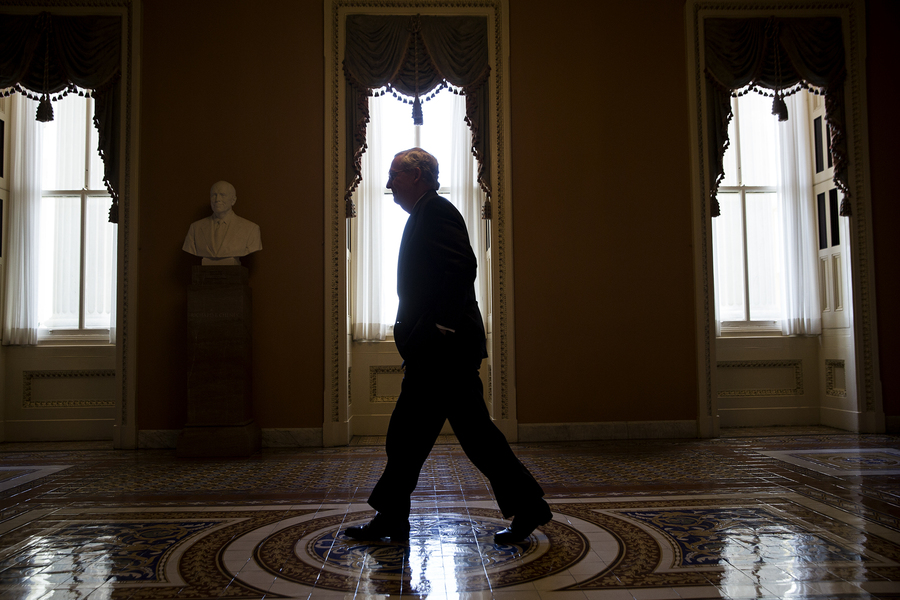 Senate Majority Leader Mitch McConnell walks back to his office after an amendment vote on the energy bill on the Senate floor, on Capitol Hill in Washington, Thursday, Jan. 28, 2016. (Drew Angerer for The New York Times)

Prime Minister of Israel Benjamin Netanyahu and U.S.President Barack Obama meet on the sidelines of the United Nations General Assembly at the Lotte New York Palace Hotel, September 21, 2016 in New York City. After eight years of tense relations and conflict between the two men, the meeting marked the final time the two would meet while in office.

President Obama visits 2nd graders at Long Branch Elementary School, in Arlington, Virginia, Friday, Dec. 17, 2010. He read an excerpt from his new children's book "Of Thee I Sing" and also read "The Night Before Christmas."

Scenes from President Obama's signing of legislation that repeals the "Don't Ask Don't Tell" policy, at the Interior Department, in Washington, Wednesday, Dec. 22, 2010.

New York Senator Kirsten Gillibrand talks with staff and prepares for a TV hit to urge support for the James Zadroga 9/11 Health and Compsenation Act, in the Russell Rontunda on Capitol Hill in Washington, Monday, Dec. 20, 2010. (Drew Angerer/ The New York Times)

The incoming freshmen class of Representatives for the 112th Congress make their way up the House steps on their way to orientation after a group photo, at the Capitol, in Washington, Friday, Nov. 19, 2010.

A man, who declined to be identified due to security concerns, touches the headstone of Petty Officer 1st Class Aaron Carson Vaughn, U.S. Navy Seal, in Section 60 of Arlington National Cemetery, December 14, 2013 in Arlington, Virginia. Carson died August 6, 2011 in Wardak province, Afghanistan. Volunteers and families of the fallen placed thousands of remembrance wreaths on headstones throughout the cemetery on National Wreaths Across America Day.

Rep. John Lewis (D-GA) is arrested by U.S. Capitol Police after blocking First Street NW in front of the U.S. Capitol with fellow supporters of immigration reform, on October 8, 2013 in Washington, DC.

From left, Sen. Ted Cruz (R-Tex.) and Sen. Rand Paul (R-Ky.) arrive for a rally encouraging the repeal of the Affordable Care Act, on Capitol Hill, September 10, 2013 in Washington.

President Barack Obama hustles to his motorcade after greeting visitors upon his arrival at Piedmont Triad International Airport in Greensboro, N.C., Dec. 6, 2010.

The White House stands illuminated in rainbow colored light at dusk in Washington, D.C., U.S., on Friday, June 26, 2015. The Supreme Court's ruling that gay marriage is legal nationwide is a 'victory for America,' U.S. President Barack Obama said today, declaring that justice had arrived for same-sex couples with 'a thunderbolt.'

Jeffrey Chiesa laughs as Vice President Joe Biden calls Chiesa's mother on the phone during his ceremonial swearing in to the U.S. Senate, in the Old Senate Chamber on Capitol Hill, in Washington, June 10, 2013. Chiesa will be an interim senator representing New Jersey until an Oct. 16 special election to fill the U.S. Senate seat left vacant by the death of Sen. Frank Lautenberg (D-N.J.). (Drew Angerer for The New York Times)

President Barack Obama's motorcade outside the Capitol, in Washington, March 12, 2013. On Tuesday, the President will meet with the Senate Democratic Caucus. The President is making three trips to Capitol Hill this week to meet with lawmakers. (Photo by Drew Angerer/Getty Images)

Pope Francis acknowledges the audience prior to speaking during a joint meeting of Congress in the House Chamber on Capitol Hill, in Washington DC, September 24, 2015. EPA/Drew Angerer

President Obama delivers his State of the Union address, in the House Chamber at the Capitol, in Washington, Tuesday, Jan. 25, 2011.

The crowd starts to disperse from Alexandria Market Square after a "Get Out the Vote" rally for Sen. Mark Warner (D-VA) and Democratic candidates, November 3, 2014 in Alexandria, Virginia. Warner, the Democratic incumbent, is running against Republican candidate Ed Gillespie. (Drew Angerer/Getty Images)

In preparation for the Democratic National Convention, balloons sit on the arena floor before they are hoisted to the rafters at the Wells Fargo Center, July 22, 2016 in Philadelphia, Pennsylvania.

Democratic presidential candidate Hillary Clinton gestures to the crowd as she takes the stage during a primary night rally at the Duggal Greenhouse, June 7, 2016 in the Brooklyn borough of New York City. On this night, Clinton secured enough delegates and commitments from superdelegates to become the Democratic Party's presumptive presidential nominee.

Delegates from Wisconsin hold their "cheeseheads" as they stand during the Pledge of Allegiance on the fourth day of the Democratic National Convention at the Wells Fargo Center, July 28, 2016 in Philadelphia, Pennsylvania.

U.S. Democratic presidential nominee Hillary Clinton is projected on a screen underneath a glass ceiling on election night at the Jacob K. Javits Convention Center November 8, 2016 in New York City.

President-elect Trump shouts that the meeting "went great" as Mitt Romney, who was being considered for Secretary of State, leaves after their meeting at Trump International Golf Club, November 19, 2016 in Bedminster Township, New Jersey. After several meetings with Romney, Trump nominated Rex Tillerson as his Secretary of State.

President-elect Donald Trump walks past President Barack Obama as Trump arrives for his Inauguration on the West Front of the U.S. Capitol, Jan. 20, 2017.