With the 2010 midterm elections only a few weeks away, the Tea Party Express bus tour kicked off their fourth cross-country tour, dubbed "Liberty at the Ballot Box," in Reno, Nevada. The Tea Party Express is part of the Our Country Deserves Better political action committee, which has poured money into the campaigns of many Tea Party candidates across the country, including Joe Miller, Sharron Angle and Christine O'Donnell.

At each stop along the way, the entertainers, political bloggers and chairmen of the tour preached smaller government, lower taxes, a repeal of the new health care law, and a return to the principles of the Constitution. The rallies were meant to energize the nascent conservative movement and urge them to vote and to "take their country back." The tour was preaching to the choir of those who attended, mostly homogenous crowds of middle age and elderly white people who often brought their children to hear the message.

The crowds were mostly peaceful, with most of them standing and agreeing quietly as they took in the message. "Don't Tread on Me" flags and anti-Obama signs were prevalent at each rally, along with vendors who sold copies of the Constitution, anti-Democrat buttons and other Tea Party swag. Traveling from stop to stop, the supporters I talked to all echoed the same sentiments; they do not like President Obama's ideas and policies and are worried the country is spending too much money. 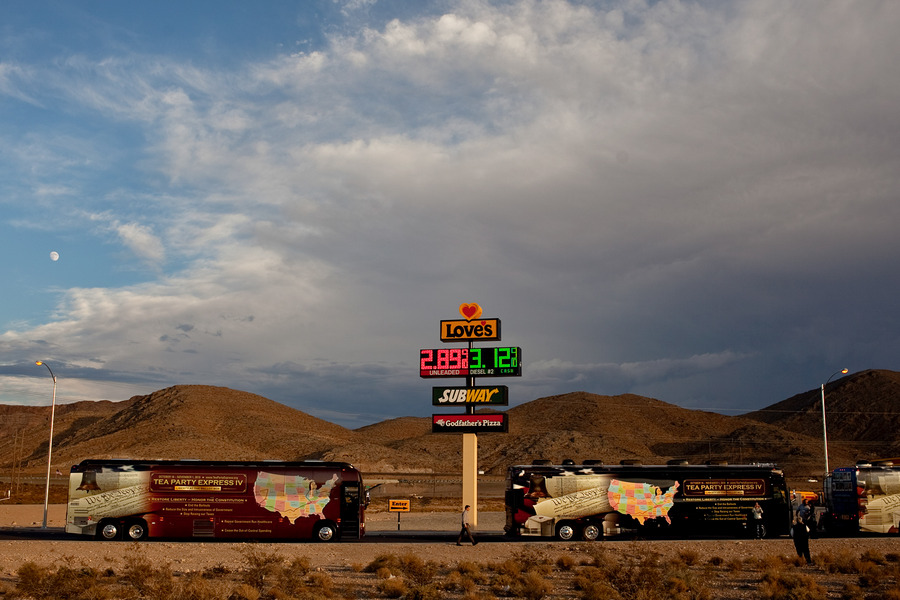 The Tea Party Express stops for a break about 30 miles outside of Las Vegas, Nevada, Tuesday, Oct. 19, 2010. Earlier in the day, they held a rally in Ely. 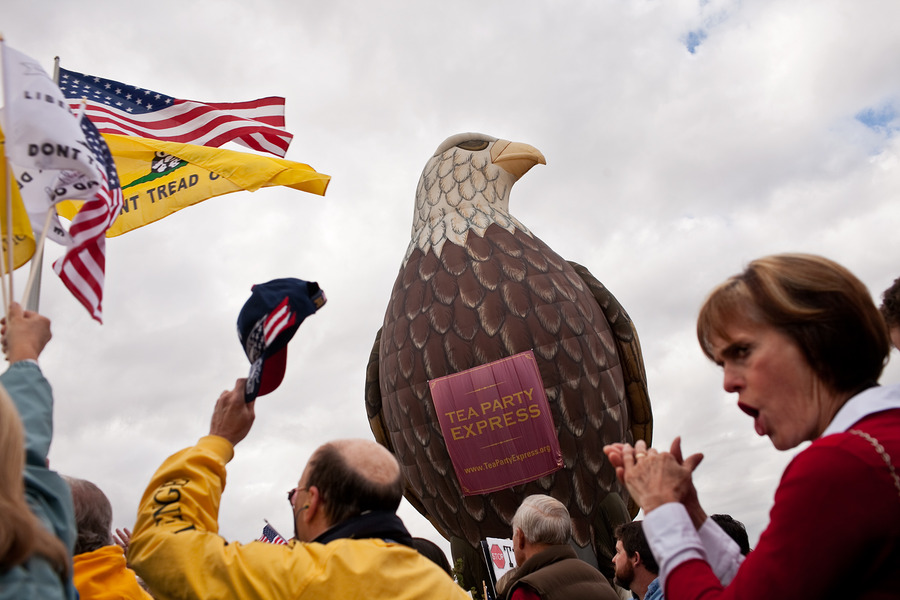 A giant inflatable eagle is seen while the crowd cheers during a Tea Party rally in Reno, Monday, Oct. 16, 2010. The rally was to drum up support for conservative candidates, including Sharron Angle. 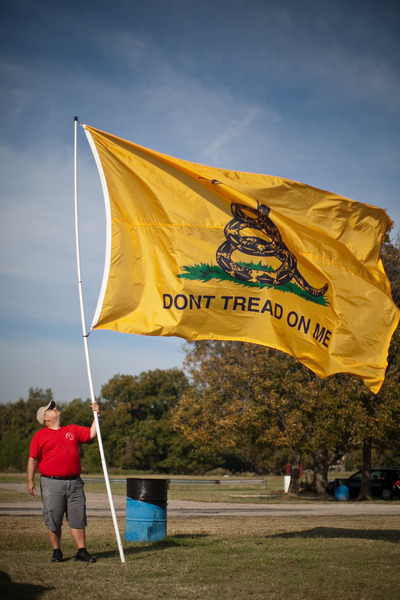 Bruce Sirk, of Forth Worth, Texas, flies his Don't Tread of Me flag (also known as the Gadsen Flag) at a Tea Party rally in Dallas, Texas, Monday, Oct. 25, 2010. Sirk said he's been involved with the Tea Party from the start. "When Obama took office, we took a sharp turn to the left. No country in the world has enough money to spend like we do and it's going to bankrupt us," he said. "My number 1 issue with Obama is his fiscal irresponsibility." 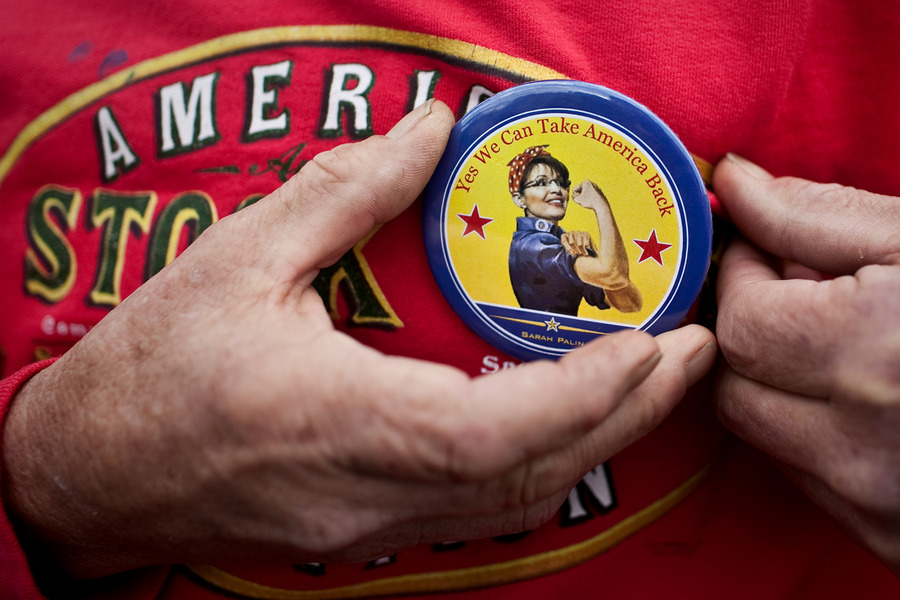 Bob Curtis, of Sparks, Nevada, puts a Sarah Palin button on prior to a Tea Party rally in Reno, Monday, Oct. 16, 2010. "I love Sarah Palin. She's honest and she's got a lot of strength. She speaks for us, instead of letting government do it for us. Too many people don't like her just because she is outspoken," he said. 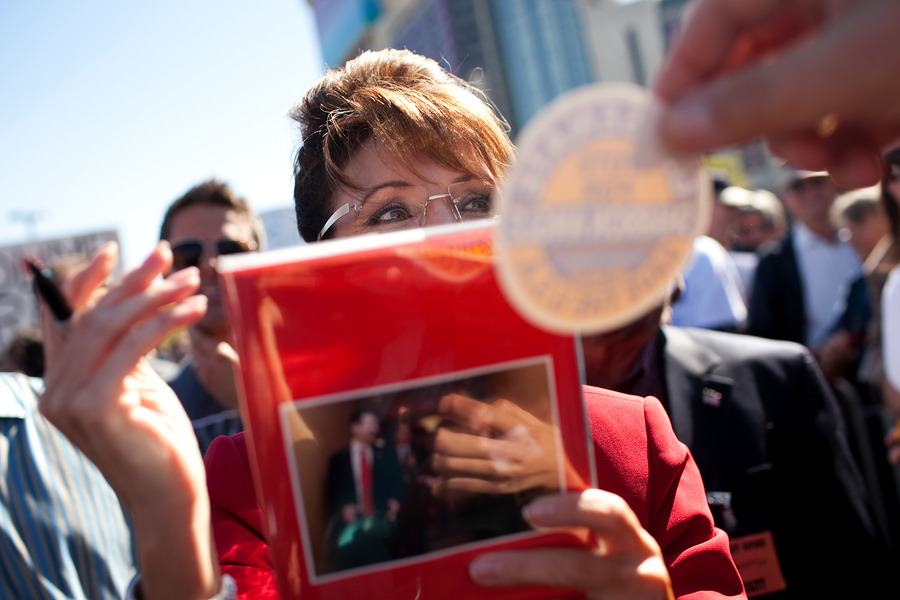 Sarah Palin signs her book for supporters after a Tea Party rally in Reno, Nevada, Monday, Oct. 18, 2010. The rally was the first of a 15 day tour put on by the Tea Party Express. 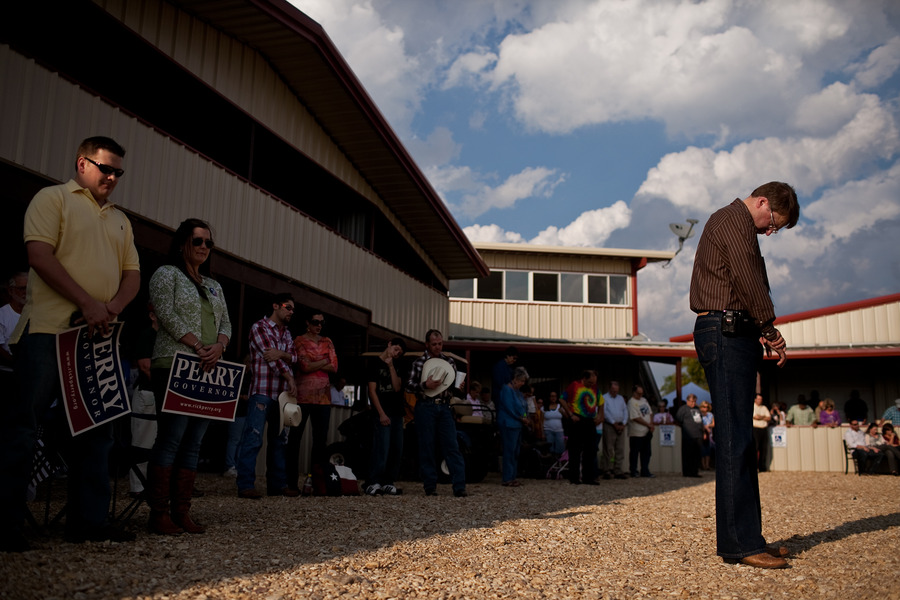 Texas State Senator Brian Birdwell, right, bows his head in prayer during the opening invocating at a Tea Party rally in Waco, Texas, Sunday, Oct. 24, 2010. During his remarks at the rally, he told the crowd, "We [the state of Texas] are fully capable of managing our own affairs, we can provide and promote for ourselves. The federal government needs to do less. We don't want to be relegated to mediocrity." He urged everyone to get out and vote on Nov. 2. "If you fail to vote and do your duty, not only do you fail yourselves, you fail the your founding fathers of this country." 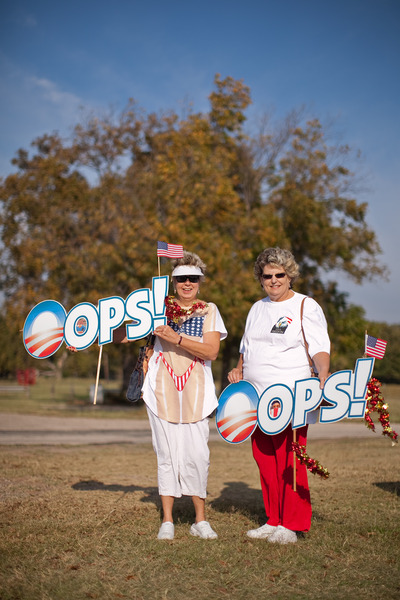 Jan Christiansen, left, and Carol Bordens, pose for a portrait at a Tea Party rally in Dallas, Texas, Monday, Oct. 25, 2010. The two run a small business in McKinney, Texas. "The government tells us there are small business loans available, but it seems almost impossible to get one," said Christiansen. "It seems like they are trying to hurt small businesses, because they make it so hard to get a loan. They say the money is there and they want to help us, but I haven't seen it." 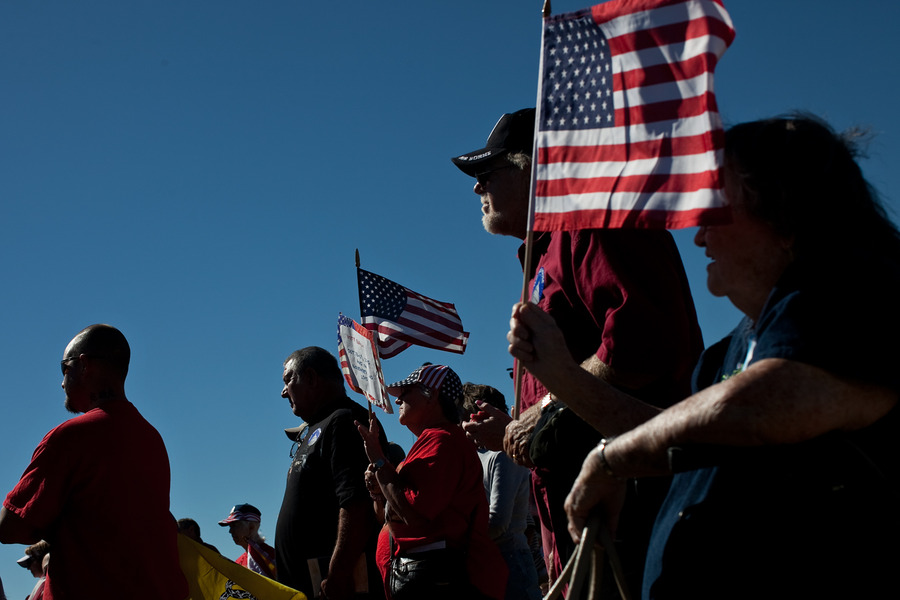 The crowd waves their flags during a Tea Party rally in Abilene, Texas, Sunday, Oct. 24, 2010. 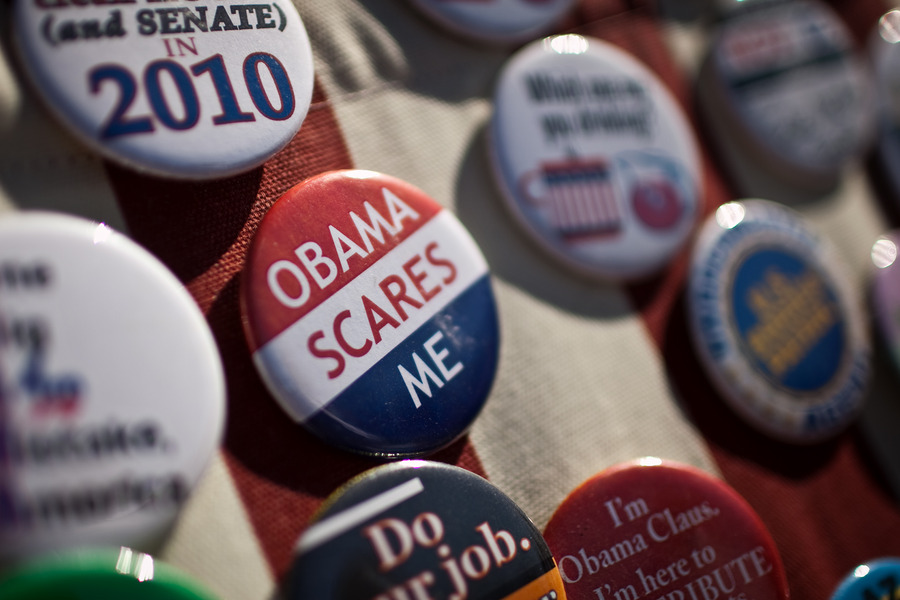 Buttons and other memorabilia were on sale during a Tea Party rally in Abilene, Texas Sunday, Oct. 24, 2010. 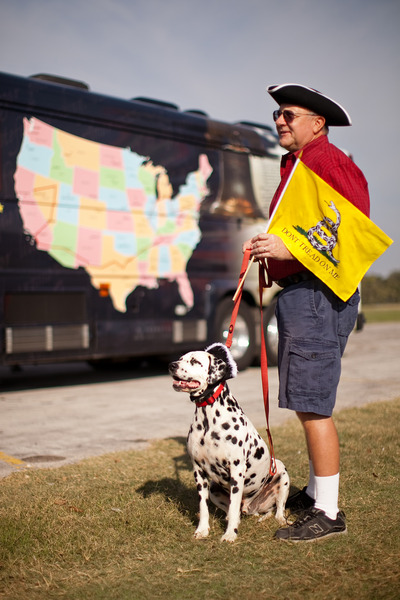 Larry Bailey, of Southlake, Texas, and his dog Pongo, attend aTea Party rally in Dallas, Texas, Monday, Oct. 25, 2010. Bailey, who is a private practice doctor, is frustrated with the amount of bureaucracy and regulations he has to deal with. "Doctors are hardly in charge anymore. Since Obama has taken office, the bureaucracy we have to deal with has gotten even worse," he said. "We've had to hire extra employees just to handle all the paperwork." He feels doctors should maintain more independence from federal government. 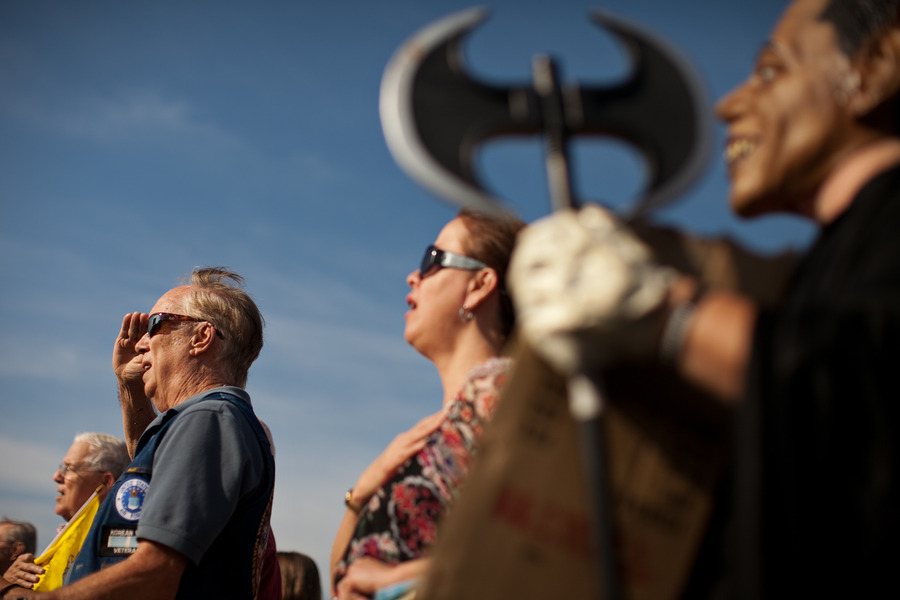 R.L. Dellis, of Fort Worth, Tex., left, saluted during the national anthem at a Tea Party rally in Dallas on Oct. 25. Mr. Dellis, a veteran of the Korean War, said he was frustrated because "too many politicians don't have any ethics today. Too many people in this country have a 'me first' attitude and are selfish." He said he would be working the polls on Election Day.

Wayne Conty, of Abilene, Texas, holds an American flag as he listens from the back of the crowd during a Tea Party rally in Abilene, Texas Sunday, Oct. 24, 2010. Conty first became interested in the Tea Party when they held their tax payer rallies in April 2009 and has since been to 3 rallies. "I've supported the Tea Party since it started. I'm just sick and tired of the way government is spending our money," he said. "I look at it like this - if you had a checking account with 1,000 dollars in it and it got down to zero, would most people wouldn't keep spending. And that's exactly what this country is doing."

Arkansas Republican candidate for governor Jim Keet fires up the crowd during a Tea Party rally in Benton, Arkansas, just outside of Little Rock, Monday, Oct. 25, 2010.

Young people were invited on stage to hold flags and sing along to patriotic songs, including "Proud to Be an American," during a Tea Party rally in Ely, Nevada, Tuesday, Oct. 19, 2010.

Glenna Dennie, of Benton, Arkansas, sits and listens during a Tea Party rally in Benton, Arkansas, just outside of Little Rock, Monday, Oct. 25, 2010. "The fact our country is such a mess right now inspired me to come out today," she said. "I don't like how Obama is handling the war. It seems like we take one step forward and two steps back. I don't have confidence in him as a leader. If we are gonna pull out, then pull everyone out. I either want us to do something big in Afghanistan or just get out. We're just spinning our wheels over there." Her late husband served in the military.

Kent Howard, a World War II veteran, talks with Elko County Commissioner Demar Dahl during a Tea Party rally in Elko, Nevada, Monday, Oct. 18, 2010. "Citizens need to take more personal responsibility and the government needs to let people make more decisions on their own. We don't need the government acting as our nanny," he said. Dahl cited government land regulation issues in eastern Nevada as something he is frustrated with.